Our focus is to guide and assist local and regional agencies to benefit from federal programs and achieve goals of long term resiliency and community development.

Typical services include grant administration for mitigation and recovery projects related to flooding, hurricanes, wildfires and other natural disasters.

A flood is defined as the inundation of land by the rise and overflow of a body of water.  Floods most commonly occur as a result of heavy rainfall causing a river system or stream to exceed its normal carrying capacity.  Flood events can also occur due to dam failure or from hurricane storm surge from a hurricane or tropical storm. Flooding is one of the most pervasive natural hazard threats, with public safety, housing, property, and infrastructure all potentially impacted by flooding.  Flooding consistently ranks as the costliest natural disaster in the United States.

There are two primary types of flooding: riverine flooding and flash floods.  Riverine flooding is a natural occurrence where a waterway exceeds its ‘bank full’ capacity and inundates the adjacent floodplain.  According to common usage, a floodplain is that area that is inundated by the 100-year flood (a flood that has a 1 percent chance in any given year of being equaled or exceeded).  Riverine flooding is affected by the intensity and distribution of rainfall, soil moisture, seasonal variation in vegetation, and water-resistance of the surface areas caused by urbanization.

Flash flooding is a localized flood that results from a short duration of intense rainfall across a limited geographic area.

Wildfire is uncontrolled fire spreading through vegetative fuels or forested areas, exposing and possibly consuming structures. Wildfires often begin unnoticed, spread quickly, and are usually signaled by dense smoke that fills the area for miles around.  Wildfires are caused through human acts such as arson or careless accidents, or through natural occurrences such as lightning.  Wildfire danger is exacerbated by dry weather conditions and excessive heat.  A significant proportion of forest fires are caused by arson or other careless acts by people.

The wildland-urban interface is an area in which development meets dense vegetation.  Both vegetation and the built environment provide fuel for fires.  The table below lists fire danger rating classifications as defined by the U.S. Forest Service.

A hurricane and tropical storm can be characterized by storm surges along a coast, high waves, severe winds, coastal erosion, extreme rainfall, thunderstorms, lightning, inland flooding, and the spawning of tornados and microbursts.  These typical cyclones will lose strength over land since their energy is derived from warm waters; however, damage from a hurricane and tropical storm can still be extremely destructive several hundred miles inland. Hurricane caused storm surge is an associated threat to Texas and other states along the Gulf of Mexico coastline.  According to the Federal Emergency Management Agency (FEMA), a storm surge is “a dome of water pushed onshore by hurricane and tropical storm winds that can reach 25 feet high and be 50 – 1,000 miles wide.”  A simpler definition is a rise above the normal water level along a shore caused by strong onshore winds and/or reduced atmospheric pressure.

Hurricanes are classified into five categories based on wind speed, central pressure, and damage potential. The classification system for hurricanes is referred to as the Saffir-Simpson Hurricane Scale shown here.

Lightning is among the most dangerous and frequently encountered weather hazard in the United States, causing approximately 100 deaths and 500 injuries in the U.S. annually.  Lightning typically occurs as a by-product of a thunderstorm.  Then action of rising and descending air in the thunderstorm separates positive and negative charges, with lightning the result of the buildup and discharge of energy between positive and negative charge areas.  The hazard posed by lightning is underrated.  According to NOAA, an average of 20 million cloud-to-ground lighting flashes is detected every year in the continental United States.  About half of all flashes have more than one ground strike point, so at least 30 million points on the ground area struck in an average year.

The National Oceanic and Atmospheric Administration (NOAA) describes a tsunami as a series of ocean waves generated by sudden displacements in the sea floor, landslides, volcanic activity or other large, abrupt disturbance of the sea-surface.  Tsunamis have reached heights of more than 100 feet.  As the waves approach shallow coastal waters, they appear normal and the speed decreases.  If the disturbance is close to the coastline, tsunamis can demolish coastal communities within minutes, and a large disturbance can cause inundation and destruction thousands of miles away from its epicenter.  The following figure was developed by the Oregon Department of Geology and Mineral Industries, showing how tectonic plate movement in a marine environment can cause a tsunami. 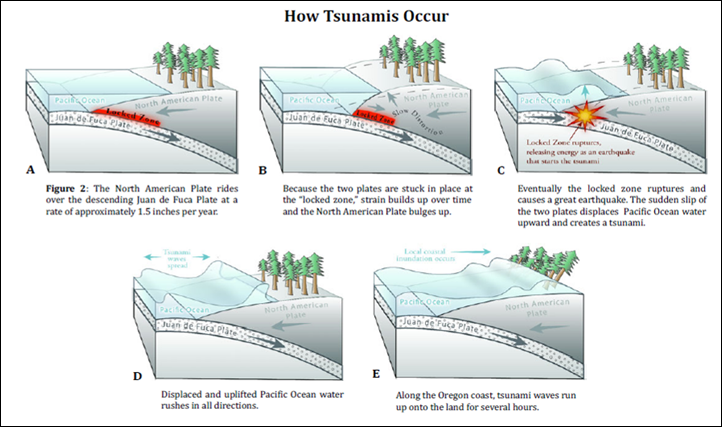 An earthquake is a sudden motion or trembling of the earth caused by an abrupt release of stored energy in the rocks beneath the earth’s surface.  The energy released results in vibrations known as seismic waves that are responsible for the trembling and shaking of the ground during an earthquake.  Ground motion is expressed as peak ground acceleration (PGA, peak change in speed of ground surface horizontal motion during an earthquake).  PGA is expressed as a percent of gravity or “g”.

Earthquakes are typically described in terms of magnitude and intensity.  The traditional measurement of amplitude of the seismic wave through the assignment of a single number to quantify the amount of seismic energy released by an earthquake is the Richter scale.  The intensity of how strong the shock was felt at a particular location is the Modified Mercalli Intensity (MMI) scale.  The scale quantifies the effects of an earthquake on the Earth’s surface, humans, objects of nature and man-made structures.  The table below is a combined earthquake magnitude and intensity comparison from the United States Geological Survey.

Landslide is a geologic phenomenon which includes a wide range of ground movement, such as rockfall, deep failure of slopes, and shallow debris flows.  Although gravity is the primary force for a landslide to occur, there are typically other contributing factors.  A change in the stability of a slope can be caused by a number of factors, acting together or alone. Natural causes of landslides include:

Landslides can also be caused or aggravated by human activities including the following:

As experienced by the public, the most common impacts of landslides are roadway blockage, and less frequent damage to homes and structures.  Categories of impacts include threat to public safety, economic impacts created by traffic delays and detours; and environmental impacts related to increased sediment pollution of waterways.  Landslides usually occur with little or no warning and therefore during contributing conditions such as heavy rainfall in steep areas, curtailment of land altering activities should be considered.

The National Weather Service defines a tornado as a “violently rotating column of air extending from a thunderstorm to the ground.” Tornados are the most violent of all atmospheric storms and are capable of tremendous destruction. Wind speeds can exceed 250 mph, and damage paths can be more than one mile wide and 50 miles long. In an average year, more than 900 tornados are reported in the United States, resulting in approximately 80 deaths and more than 1,500 injuries.

Although tornados are documented on every continent, they occur most frequently in the central U.S. east of the continental divide. Atmospheric and topographic conditions cause warm and cold air masses to meet in the center of the country, creating unstable, fast moving air at high pressure that can cause a tornado to form. Tornados occur most frequently from April to June. While most tornados occur between 3:00 and 9:00 p.m., a tornado can occur at any time of day.

Prior to 2007, tornado intensity was measured by the Fujita (F) scale shown below.

An updated and revised version of the Fujita scale is the Enhanced Fujita scale. Both scales are sets of wind estimates (not measurements) based on damage. The new scale provides more damage indicators and associated degrees of damage, allowing for more detailed analysis and thus better correlation between damage and wind speed. It is also more precise because it takes into account the materials affected and the construction of structures damaged by a tornado.

As defined by the NOAA Weather Service, drought is defined is “a period of abnormally dry weather sufficiently prolonged for the lack of water to cause serious hydrologic imbalance in the affected area.”  More simply, a drought is a period of unusually persistent dry weather lasting long enough to cause serious problems such as crop damage and/or water supply shortages. The severity of the drought depends upon the degree of moisture deficiency, the duration, and the size of the affected area.

Short term effects of drought include excessively dry soil causing plants stress and crop failure.  When rainfall is less than normal for several weeks, months, or years; the following may occur: the flow of streams and rivers declines; water levels in lakes and reservoirs fall; the water table drops, i.e. the depth to reach groundwater in water wells increases.

Drought is a unique type of disaster because it is not a discreet event but rather is the cumulative result of a persistent period of below average precipitation.  In the continental U.S. drought occurrence generally does not require evacuation nor does it constitute an immediate threat to life or property.  The effects of drought may not be noticed immediately but only become apparent after weeks or months.  The effect to the water table may take up to a year or more to be realized.

The most common impacts include economic hardship due to lost revenue from crops or loss of livestock.  Non-irrigated croplands are most susceptible to moisture shortages.  Grazing land and irrigated agricultural lands are not impacted quickly as the non-irrigated, cultivated acreage, but their yields can also be greatly reduced.  Reductions in yields due to moisture shortages are often aggravated by wind-induced soil erosion.

In periods of severe drought, grazing land can destroy the economic potential of the livestock industry wildlife habitat in the fire areas.  Under extreme drought conditions, lakes, reservoirs, and rivers can be subject to severe water shortages, greatly restricting their use for municipal water supplies.

Winter storms are characterized by ice accumulation and freezing rain, heavy snowfall, and/or extreme cold and wind chill conditions. Impacts are determined by factors such as the amount and extent of snow or ice, air temperature, wind speed, event duration, day and time. These hazard events typically create disruption of regional systems such as public utilities, telecommunications, and transportation routes.
An ice storm is used to describe occasions when ice accumulations damage trees, above ground utility lines, and affect travel surfaces. Heavy snowfall can cause extended periods of travel disruption and damage structures. Exposure to extreme cold and wind chill associated with winter storms can be life-threatening, and pipes can freeze or burst.

In 2001, the National Weather Service implemented an updated Wind Chill Temperature index. This index was developed to describe the relative discomfort/danger resulting from the combination of wind and temperature. Wind chill is based on the rate of heat loss from exposed skin caused by wind and cold. As the wind increases, it draws heat from the body, driving down skin temperature and eventually the internal body temperature.